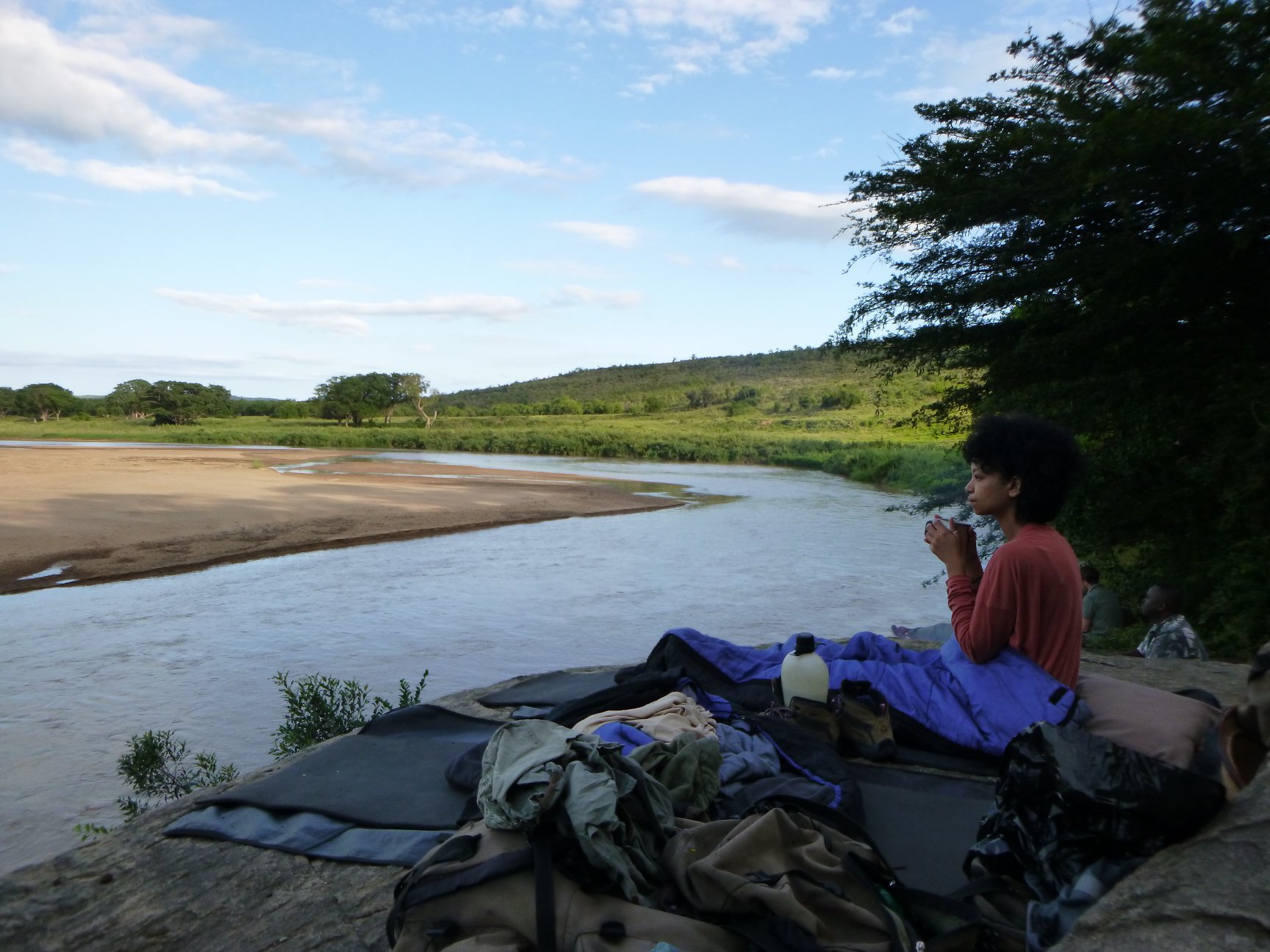 ‘Where the Spirit resides’ Angelique Michaels
In the clacking world of unabating activities and tireless pursuits, a creature, though fashioned from its troubled soil, suddenly found herself a stranger to the familiar faces and places she had for so long known and called her own. Bewildered by the scampering haste and scrambling words, something in her staggered and sunk, deep, deep into a little chamber of stillness hidden in the recesses of her own nostalgia. Here, where her heart could beat in secret solitude and find a moment’s rest.
And yet, it was the bewitching solace of her little chamber and the sweet and muted stillness to which her heart was gravely tethered.
In the twilight hue of her own longing,
her thoughts wander off into the vast and wondrous wildness of the bushveld.
There, where the great stillness feeds and bleeds into her own.
Where the rocks morph and shapeshift
with the competing stories they tell…
There, where the Black Umfolozi river carries hot clumps of earth into the heart of its waters that, with magic and mystery,
bubble and swell…
The place where the white-backed vulture briefly casts its shadow across wind-swept plains,
and the disembodied cries of the night rouse the wild beasts and spirited creatures that
croak and creep and crawl,
slither and swoop,
rattle and roar
and burrow and soar,
inside her.
It is the place where her spirit still resides. 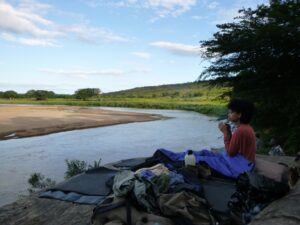 …
At night, she follows the young bulls exiled from the great herd of elephants and watches the dust for a moment suspended in the air as they move in rhythmic unison, over the sun-baked bushveld. She traces the deep creases in the old old skins of the matriarchs and holds against her breast the gruntling, rumbling and trumpeting as they ripple through her and within her too resound.
If she were to stay in this place of ache and wistful longing, she would be unable to fully inhabit the world whence she came and to which she must return. The voices in her world would be muffled by the stillness into which she withdraws, and the faces, by it, cast in shadow.
It will be, as it was before, a world of her own making. One in which the fullness seeded within her would not find expression; one in which the definitive edges between light and dark, nature and culture, past and future, flesh and spirit, would remain distinct and rigidly clear-cut. It would be a seasonless world of dissociative quiescence and longing. She had to go back to find her spirit.
And back she went; back, back, back, to where she could hear her heart beat; to where breath rises and falls like the hot wind that moves with force through the dry grass of the bushveld and the rustling reeds of the river. Back to where the wild smells of earth and strong wafts of leopard and impala bull excrement compels vigilance and stilled awareness. Back to where each sunset casts the veld in a different hue, and where the colours and shades of gold, crimson and rose, etches into memory and bleeds into heart.
Tracing the footprints of her wandering spirit, she came upon the Cape buffalo on the other side of the Black Imfolozi. They looked at one another and, for a moment, stared in disbelief and uncertainty, before the buffalo flared his nostrils and with a vigorous shake of the head, stomped his hooves into the lome bank of the river. As he moved, a silver web and a delicate spider glimmered and glittered in the morning sun; the web intricately weaved between his great horns. The spider spun and spun her silver network of interlacing mesh until her web seemed almost impenetrable. The girl was transfixed by the weaving of the spider on the horns of the buffalo who, although, every now and then, lowered his head to graze, did not, for a moment, lower his gaze.
And then the spider stopped weaving its network of fine thread, leaving a great opening at its centre. Curious and ruffled by its seeming purposeful omission and the sense of incompleteness in the web that the hole provoked, the girl waited, and waited. Until the sun, dropping down, down, down, towards the horizon, for a moment, aligned perfectly with the spider’s web. Just then, the golden orb of scarlet light broke through the sacred opening in the web spun between the buffalo’s horns, and the girl shuddered as its light, too seemed to pierce through and stream into, the hollow chambers and cracks of her deepest longing.
At night, shrouded in shadow and hidden behind a veil, the bushveld possesses a strange and numinous allure. In it, the camphorwood crackles as it burns at the fire; the hot, smoky scent of healing lingering in the air, and the dry reeds rustling on the other side of the river. As she drifts off to sleep on the rock, she can faintly hear the spider weaving away tirelessly into the night. The sound of the fluid secreted by its spinnerets, as delicate and faint as a whisper…: “It is the sacred hollowing out that allows the light of Spirit to enter and move through us”.

…
With time, the girl grew tired of looking for her spirit. The wind and rains had washed away its footsteps and she was beginning to believe that the bushveld had claimed them. Many moons had come and gone, but the girl remained, until she could no longer lift her body, weak and frail, from the rock where she lay. Time passed, until only her bones rested on the great rock by the river. Until one cold, dark night when the veil between worlds was at its thinnest and the borders between things most porous. The breath of the gods rippled through the long grass of the bushveld and between the golden reeds of the river. It swept over the plains and rattled the abandoned bones on the great rock where the girl once lay.
Deep, deep in the heart of the river, the wandering spirit she had come to the veld looking for, stirred in its evermoving, dark waters. Having lived with the crocodiles guarding the black Imfolozi river, the spirit now possessed the hidden strength and power of reptilian primal energy, and it had learnt the art of seeing, without being seen; of laying low and concealing itself until the right moment. Despite the mysteries and magic in the waters that had become home to the spirit, it understood that the bones rattled by the wind and abandoned on the rock were its own. They needed to be claimed. Untangling itself from the reeds at the bottom of the river, it thanked the waters for the fertile soil it yielded and expressed its eternal gratitude to the crocodile guardians and gate keepers for the old, old wisdoms imparted and the stories shared. Then it emerged from the waters dripping with resolute promise and rock-ribbed courage to claim its bones. Holding them to its breast and carefully tracing the writings etched into the hard, ash-white bone, it couldn’t help but laugh a little.
In the twilight hue of her own longing,
Tracing the roots of her being,
She grows down, down, down…
And her thoughts wander off into the vast and wondrous wildness of the bushveld.
Here, where the great stillness feeds and bleeds into her own.
Where the rocks morph and shapeshift
with the competing stories they tell…
Here, where the Black Imfolozi river carries hot clumps of earth into the heart of its waters that, with magic and mystery,
bubble and swell…
The place where the white-backed vulture briefly casts its shadow across the wind-swept plains,
and the disembodied cries of the night rouse the wild beasts and spirited creatures that
croak and creep and crawl,
slither and swoop,
rattle and roar
and burrow and soar,
inside her.

For the wilderness within her,
is where her spirit resides.

O place of unbridled Wilderness, I call upon you and your inhabitants now for guidance as I seek to share of those wordless teachings that you have, in turn, shared with me while I dwelt within your bushy bosom.
Mineral (Spirit of the Message):
towering mountain spires
humble stones tumbling in the tide
lying glittering and dull beneath the sand of time
are you not the the very bones of the great earth mother herself
what is life but the blanket of vegetation that has animated these bare bones
what are we animals if not mineral made flesh
ashes to ashes and dust to dust
you are the building block of all matter and where we return after we shatter
planetary DNA holds design for every cell in our mother's body
the memory inscribed in our bones gives voice to your song
cellular dreams of symbols and signs bring forth visions of purpose
reminding us our place and the need of our service

Listen Careful and Deep now for this is Sacred Time,
Whispered the Spirit in the Fire to the young Man-Bull on the Edge of his Prime
The Darkness and Silence just beyond the Safety of the Circle of Light
Was broken only occasionally by the Shrieks and the Moans of the Creatures of Night
You had felt like a Man when you had left the City to come to the Wild
But out here in the Bush your Knowledge and Strength seem like that of a Child
Since the Dawn of Time have your Ancestors gathered around the Flames
Community was born while sharing Stories, singing, dancing and playing Games
Inspired by Trees and Animals you must use your Heart to discern the Truth
If you seek to leave the idle Shelter and Safety provided by Youth
Make your Mark on the World, spread your Seeds and share your innate Gifts
Handed down by Generations of Matriarchs and Elders to help Heal the World’s Rifts
Be Wild be Fee and live your best Life
Embody Yourself seek Peace and don’t shy from necessary Strife
Give of your Fruits in Abundance and don’t judge where they fall
We are all one don’t you think after all
Seek your Rest dream on my Words and grow Strong
Now call forth your Sister for the Night is still Long
…